Bringing a Town Together 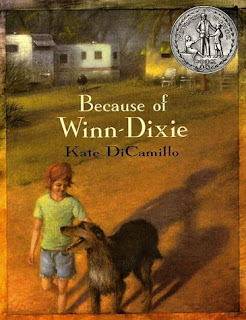 When ten-year-old India Opal Buloni moves to Naomi, Florida, with her father, she doesn't know what to expect- least of all, that she'll adopt Winn-Dixie, a dog she names after the supermarket where they meet. Before long, Opal and her father realize- with a little help from Winn-Dixie- that while they've both tasted a bit of melancholy in their lives, they still have a whole lot to be thankful for.

During the worst winter in Minnesota, Kate DiCamillo became homesick for Florida so to keep herself company she wrote a story about “longing for home and longing for a dog” and called it

Because of Winn-Dixie. Her very first published story was a success and like some of her later books, it won many awards. The book was also recognized by being nominated for the Newbery Award in 2001, which was presented to Richard Peck for A Year Down Yonder instead.

According to the author, this story is meant to be a “hymn of praise to dogs, friendship, and the South” and I would have to agree with her. It’s not a long book and it only took DiCamillo about six months to write but even so, it’s still very good and has a ton of heart. Winn-Dixie himself is just a figment of the author’s imagination however; all the characters still seem genuine and almost real… even the bird Gertrude! 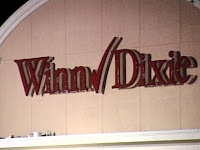 Twentieth Century Fox and Walden Media collaborated to bring Because of Winn-Dixie to the screen in 2005. I did seem the film before I had read the book and I was quite surprised at how well it was adapted. Even the author (whom the director did take advice from her and even let her re-write some of the script) has said that the “imagery in the movie is so compelling and beautiful that

it has replaced the imagery in [her] head.”

A story that is good enough to be nominated for an award shouldn’t be forgotten just because it doesn’t win, especially when it is a Newbery Award. I have yet to be disappointed with a book that has gotten their stamp of approval as they’re all charming- the ones about animals in particular. Winn-Dixie may have been a “stinky, funny, ugly, and friendly” dog but "it's hard not to immediately fall in love with a dog who has a good sense of humor."

Picture Explanations
Gone with the Wind: Gloria Dump's eyesight is bad so Opal reads to her.
Winn-Dixie Sign: Where the two meet and where the dog gets his name
Bottle Tree: Gloria’s bottle tree