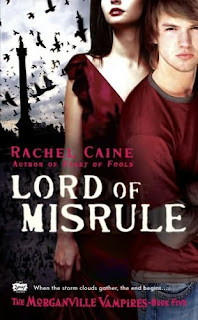 In the college town of Morganville, vampires and humans have coexisted in (relatively) bloodless harmony... until the arrival of Bishop, a master vampire who threatens to put the evil back in evil undead and smash the fragile peace. But Bishop isn't the only threat...

Violent black clouds promise a storm of devastating proportions. As student Claire Danvers and her friends prepare to defend Morganville against the elements- both natural and unnatural- the unexpected happens: Morganville's vampires begin to vanish one by one. Discovering why leads Claire to one last choice: Swear allegiance to Bishop... or die.

The storm that has been brewing in Morganville, Texas finally comes to a head in Rachel Caine’s 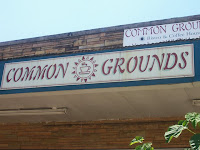 fifth story in the series Lord of Misrule. Throughout the series the readers have seen the ups and downs of the characters Claire, Eve, Michael, and Shane while they just try to stay alive in the town run by vampires. Now friend and foe begin to work together to conquer a common enemy… while others take advantage of this opportunity to raise more chaos.

Rachel Caine once stated in an interview that she wrote “adventure tales, plain and simple.” I hate to tell you this Ms. Caine but there is nothing simple about the Morganville Vampires series! There’s romance and

drama, not to mention how the characters are usually in horrible danger, then there are the great battles too. This refers to the whole series, not just Lord of Misrule… although in the case of this particular book, take all of that and multiply it by ten.

The characters have really grown throughout the story, especially the main one Claire. Even Amelie acknowledges that she is no longer the child she was when she arrived in Morganville but is now a "young lady". She's still as smart as ever but she's also more resourceful and

unfortunately, she is forced to be just a little colder than she used to be.

Have I mentioned lately just how much I dislike cliffhangers? I know I've brought it up in the previous posts about this series but its well worth mentioning it again since this book ends on a doozy of one. I have to wait until June to find out what happens next in Carpe Corpus the sixth and final story arc. According to the author it "doesn't mean there won't be more Morganville, but I want to bring this particular story arc to a close with the sixth installment."

“You’ve been expecting this,” Claire said.
“Not in detail. But I’ve learned through my life that such preparations are never wasted, in the end. Sometime, somewhere, life always comes to a fight, and peace always comes to an end.”

~Note: For the first time the author includes a music playlist

Picture Explanations
Common Grounds: The most defendable part of town
Tornado: In the midst of the war a tornado touches down
Paintball Gun: Filled with silver powder pellets to use against the attacking vampires
Posted by Ladytink_534 at 12:00 AM