Shrink to the Vampires 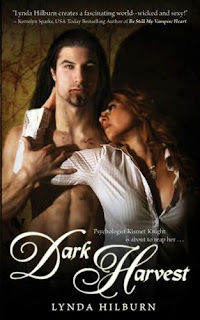 Still adjusting to her new role as an expert on all things paranormal—as well as her unexpected notoriety and new clientele—she schedules what she believes is simply another radio interview. She couldn’t be more mistaken. Not only does the radio host behave very strangely, but an ominous, on-air call turns Kismet’s world upside-down—again.

Shortly thereafter, Maxie Westhaven, a tabloid newspaper reporter in search of a juicy story, befriends Kismet, leading her into a bizarre world of role players, lost souls, and death. Enter Victoria Essex, Devereux’s building manager and resident witch, who discloses a startling secret of her own.

A recent newcomer to the world of the vampires in Denver,

Kismet has attracted yet another insane vampire into her midst in Lynda Hilburn’s Dark Harvest but what do you expect from the Vampire Psychologist? Hilburn’s alter ego is up to her eyeballs in vampire games during the second book in this series when a self-proclaimed Vampire Slayer (who just so happens to be vampire himself) comes to town.

“Why vampires? There's just something darkly appealing about the extraordinary nightwalkers. They started out human, so remnants of emotions, thoughts, learned behaviors still exist and enhance -- and conflict with --

their new, nocturnal realities.” That’s very, very true when it comes to her main hero in the series Devereux, an “old-world gentlemen” who is of course gorgeous, protective, and very interesting as well. A bit over-protective at times, he does have the heroine’s best interests in mind and at heart.

The previous novel The Vampire Shrink had many problems for me and I’m pleased to note that the author has fixed quite a few of them. I’m especially pleased that Kismet is a whole lot more accepting of the vampire situation. There were times during Dark Harvest where she thinks about blaming her mental health for things that happen but it's not long before "she can't deny the truth any more." 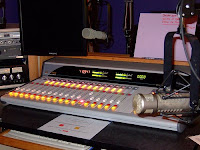 There is still quite a lot about this world that Lynda Hilburn has created that I don’t quite understand or at times still dislike but I still can’t help but enjoy the characters and even the story itself most of the time. I did feel like the author was a little too wordy for my taste though and Dark Harvest wasn‘t quite as amusing as The Vampire Shrink either. Again, I was left with more questions at the end like: who was she in a past life that Hallow was so gleeful about not telling her? Hallow is the second deranged vampire that Kismet and Deaveraux had to fight, Is he right about the fact that she draws energy to her? And most importantly, will there be a third book soon?

Picture Explanations
Taking Notes: Kismet treats her vampire patients the same way she would treat her normal ones.
Coffee: Maxie is a coffee junkie and she gets to know Kismet by taking her out to coffee.
Radio Show: Due to her rise in popularity during the last book, Kismet is booked on a radio show. Unfortunately, she wasn't aware of the host...
Posted by Ladytink_534 at 8:43 PM