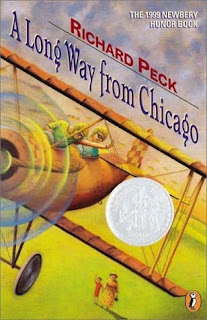 August 1929: They see their first corpse, and he isn’t resting easy.
August 1930: The Cowgill boys terrorize the town, and Grandma fights back with a dead mouse and a bottle of milk.
August 1931: Joey and Mary Alice help Grandma to trespass, pinch property, poach, catch the sheriff in his underwear, and feed the hungry- all in one day.

And there’s more- much more- as Joey and Mary Alice make seven summer trips to Grandma’s, each one funnier and more surprising than the year before. In the grand storytelling tradition of American humorists from Mark Twain to Flannery O’Connor, Richard Peck has created a memorable world filled with characters who, like Grandma herself, are larger than life and twice as entertaining. And year round, you are sure to enjoy your stay with them.

Cheatham’s Last Night Above Ground” when the author Richard Peck realized that a character such as Grandma was “too sizable to be confined to a single story, too sizable and mystifying to her growing grandchildren, who in each visit discover her as a different woman.” Therefore, he created an entire novel based around those summer visits of Joey and Mary Alice’s and

he called it A Long Way from Chicago. Grandma’s antics entertained many, many people and it was a finalist for the National Book Award (for Young People’s Literature) and became a Newbery Honor in 1999 as well.

This was the first book by Peck I had ever read and I was amazed at how easily he takes the reader back through time to the 1930’s. He talks of Shirley Temple, John Dillinger, the Depression, the current president then (Franklin Delano Roosevelt), and the summer vacations of childhood that are so quickly over. Frankly, he evokes a deep sense of nostalgia even if it was an era I’ve never known but at the same time, it’s a very lighthearted and at times funny story- again, thanks to Grandma! Every new “year” of the book, I wondered how in the world would she top last “year”? Will she do something crazy or kind? Honestly, sometimes she did both at the same time and there never was a boring part in the entire story.

Being a coming of age story, a lot of A Long Way from Chicago was written with the own author’s childhood in mind. Peck has stated that while he didn’t have a Grandmother like Grandma (“When you're a writer, you can give yourself the grandma you wished you had”), he did have other things in common with the main character Joey such as his love for cars, the little town that is similar to the one he visited his own grandma in, and so is the house- right down to the snowball bushes. However, unlike Joey, Richard Peck is a

very accomplished author who has even received the National Humanities Medal- being the very first children’s book author to do so.

Everyone has either had a Grandma like Grandma Dowdel or at least known one like her… at least on a lesser degree as there is only room for one Grandma Dowdel! “Larger than life” doesn’t even begin to depict this spunky lady. I truly got a kick out of the things she got herself, and therefore her grandkids into. Little wonder that Richard Peck couldn’t stop her with just one book so he wrote a sequel in 2000 called a Year Down Yonder, which unsurprisingly was nominated for the Newbery award too… and that time it won.

QUOTE:
"Mrs. Dowdel, you falsified those so-called Lincoln items. They're bogus. I could have the law on you."
"That's right." Grandma gazed over him at the wide-mouthed bass. "The banker throws the poor old widder in the pokey. That'll look real good for your business."

Picture Explanations
Winchester Shotgun: Seems to be one of Grandma's prized possessions
Cherry Bomb: The Cowgills start terrorizing the townsfolk... including Grandma
Catfish Dinner: Grandma shows just how charitable she can be when she feels like it
Gooseberry Pie: The fair comes to town and after several urgings; Grandma enters her famous gooseberry pie. Will she win?
Railroad Tracks: Grandma tells a spooky tale about the phantom brakeman
Terraplane 8 (car): Joey's "first love"
Parade: The town's centennial parade takes place.