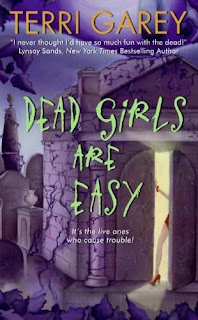 There's something about almost dying that makes a girl rethink her priorities. Take Nicki Styx-she was strictly goth and vintage, until a brush with the afterlife leaves her with the ability to see dead people. Before you can say boo, Atlanta's ghosts are knocking at Nicki's door. Now her days consist of reluctantly cleaning up messes left by the dearly departed, leading ghouls to the Light . . . and one-on-one anatomy lessons with Dr. Joe Bascombe, the dreamy surgeon who saved her life. All this catering to the deceased is a real drag, especially for a girl who'd rather be playing hanky-panky with her hunky new boyfriend . . . who's beginning to think she's totally nuts. But things get even more complicated when a friend foolishly sells her soul to the devil, and Nicki's new gift lands her in some deep voodoo. As it turns out for Nicki Styx, death was just the beginning.

“My name is Nicki Styx, and I’m a dead chick magnet. A psychic magnet, if you will. One near

death experience, and my life was changed forever. Now restless spirits seem to sense a kindred one in me, and they all want to tell me their stories.” An interesting beginning but hardly one that can sum up Terri Garey’s spunky heroine with a wicked sense of humor from her debut novel Dead Girls Are Easy.

Garey’s book was one of the best paranormals I’ve read so far this year. It was hilarious and interesting, and just plain fun! The characters are great; especially the main one and I loved her

kitschy little shoppe that she co-owns with her best friend Evan (who is a doll by the way). Another thing I liked is that I’m a bit partial to the setting as it takes place in Atlanta- Little Five Points to be exact.

The Nicki Styx series is everything that the show Ghost Whisperer wishes it could be. While most of the time the TV show either goes for the scary or the heartwarming with the main 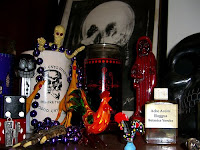 character being mostly a good girl, Garey and her character Nicki Styx are the complete and total opposite. Well, that’s not to say that the book was not heartwarming at times as it is, but as Nicki said, she’s “one tough cookie” and while her Joe does remind me of Meredith’s Jim, I believe that if I had to choose, I’d pick these books over the TV series any day.

I do wonder why the author decided to write this series. Did she watch the show and become

fed up with it and decided to put her own spin on a girl who sees dead people? Did she hear about the show, think it was a good idea and go from there? Or was it something else altogether? Well the author claims she found herself thinking one day: “What if someone who thought the dark side was really cool (i.e., a Goth girl) actually had to deal with ghosts and spirits on a regular basis? How would it change them?” Regardless of how she came about Nicki Styx, I’m just glad she did and I can hardly wait to read more in this series.

“And what do I get out of it? Scared shitless and sleepless, that’s what. Dead people jumping up like Pop-Tarts to impose their unfinished business on me. Dying isn’t what scares me-- it’s living like this that does.” I leaned forward, hands clasped. “Do I look like Mother Teresa to you?”

Picture Explanations
Emergency Room: When Nicki died she came back with a little something extra.
Little Five Points: Takes place here
Voodoo: Nicki's friend died and her soul is in deep trouble...
Baron Samedi: is one of the loa of Haitian Vodou and features prominantely in the book.