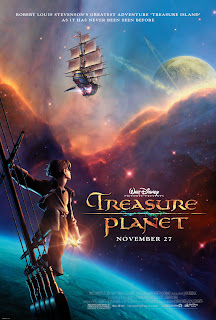 From the directors of Disney's Aladdin and The Little Mermaid comes a spectacular new motion picture for the entire family. Buckle up for thrills and excitement as a classic story of friendship, courage and self-discovery gets an incredible, futuristic twist for an all-new generation. It's "a truly wonderful tale combined with stunning animation." (Paul Clinton, CNN).

The greatest adventure of all time is now a thrilling DVD experience. With sensational bonus features and revolutionary 2-D and 3-D animation, Treasure Planet is an out-of-this-world sensory experience the whole family will enjoy.

An adaptation, or more accurately, a re-imagining of Robert Louis Stevenson's novel Treasure

Island had been pitched to the Disney company by the director’s Ron Clements & John Musker since their directorial debut with The Great Mouse Detective but they were repeatedly turned down. They directed three more animated films before they ever got the green light to begin work on what they had hoped would be the “first big space adventure Disney [had] ever done,” (Lilo and

They can fiddle with the original storyline as much as they please so long as the “adaptation” still captures the essence of the story which this film fortunately does. The story was unique and so was the technique employed to make it as they used 70% new technology (CG animation) and 30% old technology (traditional

animation) but they blend together almost seamlessly to create a wonderful experience.

I also loved how they brought the characters to life too. Long John Silver (voiced by Brian Murray) is one of my favorite characters of all time (mainly thanks to the original 1950’s Disney version) and he was perfect in the film- even if he was a cyborg! I also really loved the look of Jim (voiced by Joseph Gordon-Levitt) as he always seems a bit younger in the book and all the films I’ve seen. Awesome soundtrack to

The last few years before Disney stopped making animated films they produced several really good films but not any really great ones and unfortunately Treasure Planet was one of these. It cost quite a bit to make and was a financial failure too- one of Disney‘s biggest! However it was nominated for the Best Animated Feature Oscar anyway but it went to Hayao Miyazaki's Spirited Away instead. It was a wonderfully, inventive adaptation/ re-imagination of classic story regardless though.